Are You Ready for the Astropocalypse?

This weekend I got the opportunity to play a new micro-boardgame from Ryven Cedrylle, a friend I’ve had the honor of knowing and gaming with. It’s called Astropocalypse, and I had an absolute blast with it. It’s diceless and features a very quick character creation (if you can even call it that). It’s a four-act narrative with one scene per character each act.

My character was Mordecai, a Christian minister that became a Youtube sensation after an embarrassing sermon. By act 4, Mordecai found himself delivering the last great sermon before the world’s end. Although he died from an “Final Destination” style electrocution during this sermon, he went out the way he would have wanted, giving hope to millions. If you want to see an actual play (AP) of our game, follow the link here.

Here’s how the board ended up… 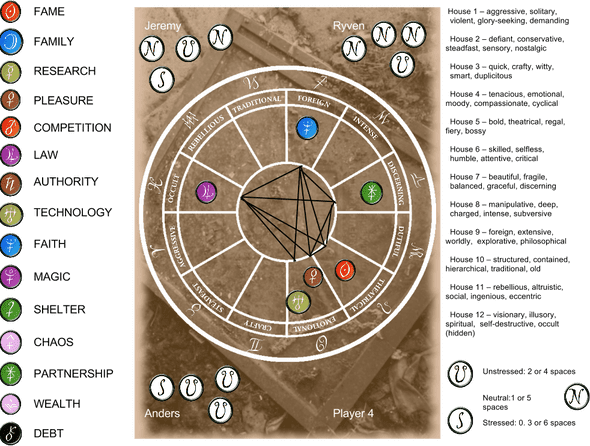 The game is part of the Machine Age Production’s Micro Game Mega Project, so you’ll get it for free if you backed that Kickstarter. Ryven told me it’ll also be available on RPGNow and DriveThruRPG at some point. Keep your eyes peeled because it’s a fun game that took about 90ish minutes to play and is for 3-4 people.