Bringing Planescape Back to the Planes 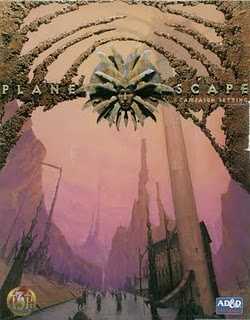 After reading NewbieDM’s post here on the Planescape Campaign Setting, I managed to pick up my own copy, complete with all the maps. Something had reawakened in me, and I had to have it. I’ve always loved the flavor of Planescape, although I’ve never actually played a single game of it. When I was younger, I devoured several of the books (which weren’t always easy to come by).

It got me thinking: how would I convert Planescape to D&D 4e? This serves as an introductory post to collect some of my thoughts on what I think the conversion process should look like. Specifically, this will be a rough framework going over some of the major things to consider for conversion.

The first major problem is definitely the new alignment system. The Planescape cosmology depends very heavily on the older 9-alignment system. This is actually not a large problem as I see it. I’m unaware of any crunch (the mechanics or rules) that require certain alignments. Gone are the days of alignment languages, detect alignment, and the like.

The older planes were odd places (concentric hollow spheres, infinite layers, endless maze-like caverns, a morass of clockwork gears, and the like). While I like the new take on the planes, I much prefer the strangeness of the Planescape ones. There is already crunch dealing with the differences between planes. Each plane will just need a few of these (taken from existing material or crafted from scratch).

I think the majority of the races will do, although I may need to re-skin a few, and it would be good to give some setting support for some of the lesser-played races (I’m looking at you, Shardmind). I’ll need to reread and possibly acquire some more Planescape books to see if there are any missing races that I’ll need to create.

The Sigillite factions can definitely be themes (similar to how the new Neverwinter Campaign Setting book does things). It might be a good idea to have some paragon paths and epic destinies to go along with them too. I’ve got two epic destiny ideas in my mind that I think would be awesome.

I think there’s enough classes already without adding more to the mix, although we may have to change the flavor for some of them a bit.

Monsters shouldn’t a problem, I can re-skin / craft as needed.

I’ll be adding posts to this series as I find time / motivation. Hopefully, there’s enough here to serve as a rough framework. Has anybody had similar thoughts? Can you think of any glaring omissions?

There are several different threads on our forums over at Planewalker that should interest you. You’re not the only one working on 4e conversions, although it’s great to see more people doing so.

Sorry I did not see your tweet until now, been mind bogglingly busy recently.

If you’ve got any questions email me, I’m one of the Planewalker managers.

I’ll definitely check out the forums. It’d be good to see what others are thinking about.

Just let me know if you need anything, it’s why I’m here.