I bought my brothers-in-law the fourth edition Legend of the Five Rings sourcebook in PDF form from DriveThruRPG for Christmas. 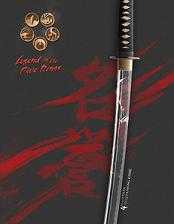 They’re both fascinated with feudal Japan (the younger one in particular). They both like D&D, but after seeing this new edition of Legend of the Five Rings, I thought they might enjoy it more. It was also a wonderful opportunity to branch out a bit from my D&D-centric world.

Corey (the younger brother-in-law) will be the GM, and John and I will be the players. This will be Corey’s first foray as a gamemaster (GM), and his excitement is evident.

This post will not cover character creation in detail, nor will it go over all of the mechanics. I’ll make some observations of things that surprised me or things that I really liked or disliked.

The first aspect of character creation that took me by surprise was that stats do not seem as important as skill ranks. My reading of the mechanics of the Roll and Keep system appear to support this, but I could be wrong. Time will tell.

The essence of the Roll and Keep system is the target number (TN) set by the GM. TN represents the difficulty or complexity of the task (similar to the DC in D&D 4E). A character’s skill determines how many d10s to roll. The stat associated with the skill then determines how many of these rolls to keep (Roll and Keep, get it?).

For example, let’s say that our character, Otobe, has 3 skill ranks in Spellcraft. Intelligence is the stat associated with Meditation. Let’s say his intelligence is 2. He has a 3k2 for Spellcraft (Int) checks. The GM declares the difficulty of identifying a lingering magical effect as 20. Our player rolls a 9 7, and 3 on his d10s. He keeps the 9 and 7 for a total of 16. Unfortunately, this falls short of the 20 required to identify the effect.

This concept of rolling a selection of dice and keeping some of them really appeals to me for some reason. Maybe it’s just the idea of rolling something over than a d20. Maybe it’s the illusion of choice in which to keep (because under normal circumstances one will keep the highest rolls). I’d be interested to see how the probability distribution of multiple d10s differ from that of a d20.

The list of skills is detailed without being overwhelming. It falls somewhere between D&D 3.5E (many and focused) and D&D 4E (few and broad). Some of them and their intended uses look intriguing.

The system also includes advantages and disadvantages, which I am a big fan of. I like the added customization and roleplaying hooks it can give players and GMs.

Have any of you played L5R, either this edition or previous ones? How does the skill system work in game? Do you like the advantages / disadvantages? Most importantly, am I correct in my assumption that skills weigh more heavily than stats?

Close. The roll and keep system is skill rank plus ability score keep ability. So in the above example the roll would be 5k2. Rank 3 + Int 2 keep Int 2. As you progress in the game you will find that rolling more dice is quite good and that 5k3 is a god ratio in the early game. You will however want to pick up the keep rolls as TNs will get harder. While some of this can be mitigated by the exploding tens as in most games you should not count on your die to help you through it.

As a side note keeping more die will help you if you decide to raise a TN for maneuvers or if your GM decides something needs a raise.

PS: L5R has the reputation of being the most lethal RPG system out there for players. I agree with this having lost many a Bushi.

Thank you for the feedback. Good to get some input about how the system works later on in the game, since it’s harder to see that having never played the system.