In the DM’s guide provided with the Planescape Campaign Setting, several races are mentioned. Let’s discuss how to handle these races in 4E. For several of them, I think we can just use the races as described. Obviously, the fluff might need to be changed, but that’s always within the DM’s purview.

I think this gives us a good starting point. Obviously, the DM is within tgeir rights to disallow certain prime races if they don’t fit with their vision of the campaign.

Races That Present More of a Problem

None of these has a representative race in 4E. The 4E equivalent of the Aasimar is the Deva, but the fluff and crunch have drifted enough to make this race a less than optimal replacement for the Aasimar. We’ll have to draft something ourselves for all three of these.

Let’s start with the Rogue Modron. Feel free to use the description below in your home games. Share, modify, or whatever, just give me some credit for the idea. 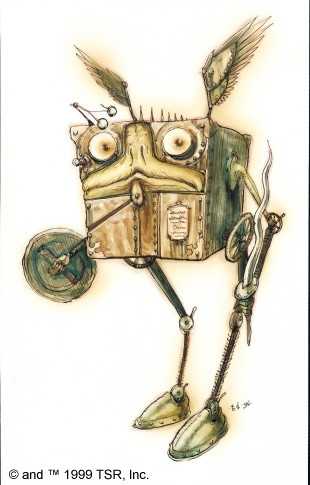 An orderly being with some issues. Something has definitely gone a bit wrong…

Languages: Common, Primordial, choice of one other

Rigid Mind: At character generation, roll a d20 and record the result. This is the rogue modron’s base initiative roll for all encounters. Note that its initiative bonus will continue to increase, and this racial feature does not preclude the player from taking initiative-based feats.

Immortal Origin: You are native to Mechanus, so you are considered an immortal creature for the purpose of effects that relate to creature origin.

I’m still struggling with what a good racial power would be. I need more time to think up something. I also have some good ideas on some racial feats to bring in more of the flavor of the rogue modron as originally written.

Also, at the DM’s discretion, the rogue modron may be allowed to re-roll his base initiative during the campaign. I would keep this to every tier or possibly when the character has undergone some traumatic or otherwise defining moment.

What do you think? For those familiar with the source material, have I faithfully recreated enough of the race’s original flavor? Any thoughts on a compelling racial power?

A random roll at the beginning of creation that could destroy or overpower a character seems a little much. Being stuck with a roll of 1? Even with great dex and feats, you might never go first. And if you rolled a 20? That would be a huge advantage. Maybe you could simply give them a power to take an 11 instead of roll initiative. 11 is better than 10, so I would guess most players would take this option, but you could also just make it a constant effect. This would give them the sense of predictability, but not nerf some and juice others.

As to a racial power? I’m not sure. If I think of something, I’ll let you know, although I also just look forward to what you come up with.

By the way, I found you through Sarah Darkmagic. I love the work you’re doing on Planescape!

A good racial power might be something along the lines of “Trigger: you roll initiative. Effect: You gain a +2 bonus to one attack roll, skill check, or saving throw this encounter. Instead of a d20 roll for initiative, your base is 11.” That way the character can have some variance, but the benefit of the +2 gives them incentive to take the 11.

I think it being a racial power undermines the mechanics of the race as originally presented due to their being creatures of law. With that being said, is there a way we could get that flavor - their obedience to law - somewhere else?

Also, see my next post for a fully-stated rogue modron with a racial ability.