Today, I have the write-up for the third and final race that we need to deal with for now, the Aasimar. Technically, the Deva is the 4E equivalent of the aasimar, but the race has drifted enough that I thought it was a good idea to leave the Deva and craft something new.

I know a lot of people prefer the tiefling with its infernal bloodline, but the aasimar has always had a special place in my heart due to its celestial heritage. Hopefully, my incarnation of the aasimar will be as interesting as the tiefling.

You’ll notice that it resembles the Dragonborn’s Dragon Breath racial power. I’ve lowered the accuracy (removed the +2) and bumped the damage (to a d8). It’s radiant, which might be overpowered against undead, but it shouldn’t be too bad and gives the celestial a nice dose of “goodness.” I also added the shedding bright light because I think it’s a cool effect.

Let me know what you think in the comments. 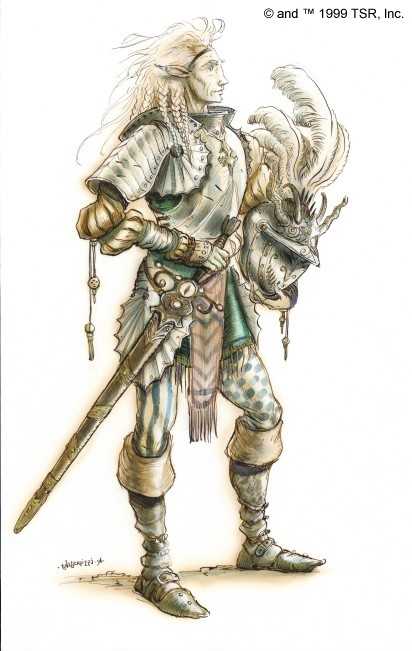 The aasimar’s heritage is easy to see, noble features with a glint of something otherworldly in the eyes. There is celestial blood somewhere in this race’s background.

Languages: Common, choice of one other

Planar Resistance: Choose either cold or fire. You have resistance equal to 5 + one-half your level to this damage type.

Celestial Mind: You gain a +5 racial bonus to saving throws against charm and illusion effects. 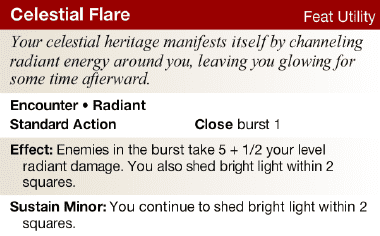 Immortal Origin: You are native to the planes, so you are considered an Immortal creature for the purpose of effects that relate to creature origin.

So, that concludes the race updates for now. I have a few ideas for what I’m going to do next, but I’d like to ask: what do you want to see next?

Feedback on the Aasimar: Nice! I like it quite a lot.

I have a few nits to pick, because that sort of iterative development is really my favorite way to work; I hope that it doesn’t seem rude or overly critical.

Language: usually, the game treats Abyssal and Supernal as special cases, in that you cannot learn them at 1st level. I think that this might be the place to break that rule - instead of ‘your choice’, just make it Supernal. This does change a bit based on your campaign, though - if you’re introducing some of the old 2e Planescape languages, then you might want to change the place of the `meta’ languages in 4e (primarily Abyssal, Supernal, and Primordial).

Skills: I’m not really seeing where History comes from, but I would have thought that Religion would be a lock for this race. These gods are literally raised on religion! :-)

Planar Resistance: this is a good change from the Deva, nicely matching the 2e Aasimari feel. I will caution you that I think the Deva auto-scaling resistance is a little too strong in practice, so I would seriously consider cutting that from the Aasimar. By way of example, if the party fights a fire elemental, the aasimar should have an easier time, but still feel some heat. With the Deva-level scaling, the Aasimar is going to be basically unscathed.

Put another way, I think this was a mistake on WotC’s part, and I urge you to be careful about repeating it. Making it 5/10/15 is plenty strong.

Celstial Flare: A fine power, nicely thematic. There are some formatting problems that you might want to fix, and then there’s a design decision…

First: a power doesn’t do radiant damage just because it has the radiant keyword; you want to say “radiant damage” in the power. I doubt that this nit will cause you any problems at home, of course.

Second: the Effect needs a duration. Based on the Sustain line, I’m going to assume that you meant to say “…until the end of your next turn”. Another nit that probably won’t matter in your own game.

Finally, the accuracy on the power: You really should be very careful about taking out the scaling bonus to hit. As a non-weapon, non-implement power, it’s already behind the accuracy curve, and it won’t get better - no feats, no items, etc. Modern WotC powers like this actually increase the bonus (+3/+6/+9).

In general, a power that is significantly less accurate just isn’t going to be much fun. Occasionally, you’ll get a wild, long-shot, saved-us-on-a-good-roll situation, but the majority of the time, using the power won’t be fun. Aasimar doesn’t strike me as the place to put long-shot “hope I get lucky” powers.

Of course, you might be planning on negating most of these problems at a lower level. For example, if your Planescape 4e conversion includes a general rule like “Inherent bonuses are used for all attacks, and all characters are assumed to have a +1/+2/+3 by tier feat bonus to all attack rolls.”, then you have cut out a bunch of the ‘feat taxes’, and also solved the general problem with powers that fall into the ‘bonus gap’. If that’s your world, then having a power that’s slightly behind the ‘main’ powers is a perfectly fine choice. Without something like that, these non-implement, non-weapon powers almost always start off behind the curve and get worse over time.

I’m a fan of iterative development as well. I’m already seeing that I’m going to need to do a follow-up post with revisions for each of the races (probably one post for all).

History to Religion sounds like a good change. Done!

I haven’t given as much thought to the languages. I’m trying not to bring in too much material if something already there can do the job (which is why I had to add Modron; the Dabus form of communication would be one that would be needed as well). I did have the thought about Supernal can’t be learned at first level in the back of my head. On second thought, I think it should go in.

The 5/10/15 scaling is fine and retains the feel I was going for. It also adds a nice nuance that the Aasimar isn’t fully planar, which I like. (I’m all about the nuance).

You’re right that the power has some formatting issues. I’m working on a better way to minimize this happening. The power does do radiant damage, so I will add that. And I did intend for the duration to be “until the end of your next turn.” I’m not sure what happened there.

I do like the inherent bonuses, and I suppose I had that working sub-consciously. I’ll think about adding some accuracy. I might have intentionally decreased the accuracy and bumped the damage up a bit to compensate.

As always, thanks for the comments. I am open to constructive criticism.

Let me add that I want others to be able to use these, so I’m going to strive for excellence in the format. I don’t want to miss out on the little details (like adding radiant to the damage).

I gave aasimar the ability to add their Wisdom modifier to all healing powers they use. I also gave them a stat bonus to Wisdom. Given the amount of support for leaders and healers in 4th Edition, I think this would have the effect of creating a lot of aasimar leaders/healers. It’ll also make the characters more powerful since they can absorb more damage during encounters. If I may ask, though, where do you get the idea for celestial fire? Is there something in a Planescape source book that suggests it?

There’s not anything in a Planescape source book that suggested it. Since Aasimar are the upper-planar equivalent of tieflings, I looked at their Infernal Wrath ability. I thought that the idea of an aasimar channeling their celestial heritage into a close burst around them, leaving them glowing was a nice fit for the race. I’ve tried not to design any of the races with an overwhelming advantage for any particular class / role.

I’m trying to use the original source material and see what’s already been done with 4E and throw them both into a pot and see what comes out. Sometimes it arises naturally (the resistances, for example). Sometimes I have to think about the original flavor and craft something using 4E mechanics (easier than it sounds a lot of the time).