Editor’s Note: The original post of this talked about a gender binary. That’s been removed in this version. I also removed the part about apologizing to fans of the original races if they were offended. I made the right call reamoving the biology-based dimorphism. Deal with it. -JM

Last time, we covered the Rogue Modron. This time let’s turn our attention to the bariaur.

One of the questions I had to ask myself was how to handle the stat bonuses for this race. Unusually, the bariaur had different stats depending on whether you were playing a male or female. I decided the best way to handle this was to use the secondary stat bonus mechanic introduced in the Player’s Handbook 2 (all races have had this mechanic retrofitted to them).

This brings up the question of how to handle the other differences between the races. I even had an expert in the corner, Sarah Darkmagic, that I consulted on how best to handle these differences. Basically, I’ve gone with two racial powers, and any gender may choose either power.

So, without further ado, I present my version of the Bariaur for 4E: 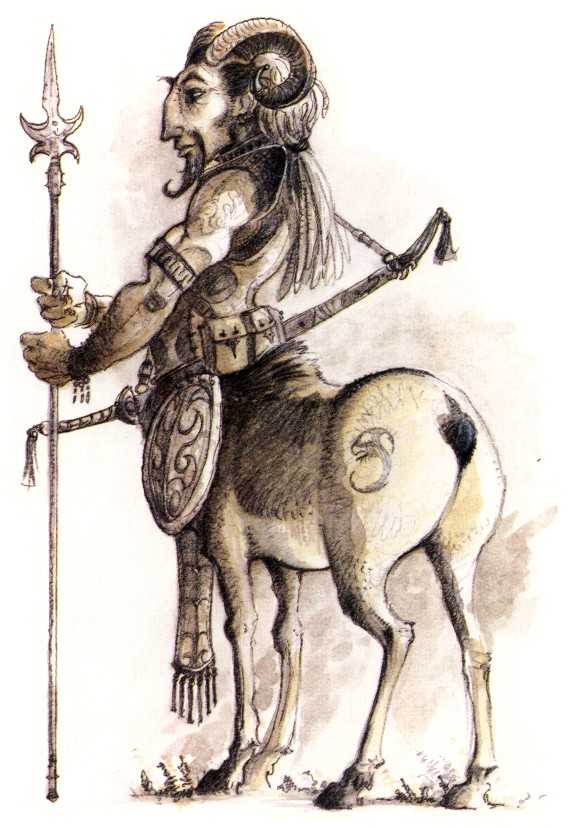 Physically resembling the crossing of a human with a ram, the bariaur are a carefree people. Freedom, laughter, the joy of victory: these are to be valued above duty, honor, or gold.

Languages: Common, choice of one other

School of the Ram: Choose either the Battering Ram power or the Magical Adroitness power. 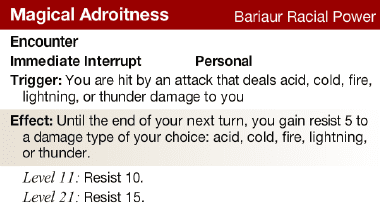 Immortal Origin: You are native to Ysgard, so you are considered an immortal creature for the purpose of effects that relate to creature origin.

Very cool. I like what you’ve done with the race, and it feels very classic.

I personally think you should keep the gender differences. I agreed with Sarah’s overall points, but I think for Planescape, beings are more representative of their eternal nature. In this way, the sex differences being accentuated helps reinforce the other-worldly nature of the setting. Besides, female Bariaur with huge ramming horns? That seems to move away from the their real world ram heritage, where females have not horns.

I’m walking a fine line here between retaining the classic feel (which I mentioned in reply to your other comment) and being sensitive to a very emotional issue for a lot of people.

I’m very happy that it feels classic. Just what I was going for. Thanks!

If you’re troubled by the gender splits and the classic feel, why not simply give the race a choice of ‘charging horns’ or not, tie the power to having or not having the horns, and then say that most males have horns? Adventurers are outside the norm anyway.

The charging power is ok at 1st level and steadily worse from there, especially if you use the ‘in place of a melee basic attack’ wording. I realize that you just used the minotaur’s goring charge, but that power is also problematic. You may or may not care, depending on your campaign, but the minotaur has a lot of support (Compendium suggests 24 feats), and still goring charge basically disappears (or gets turned into something else) above mid-heroic.

Racial attack powers are hard to balance, as are racial standard action powers; a racial standard attack is really rough. Characters generally should be using standard actions to accomplish their primary goals; damage-only powers are the ‘goal’ primarily for strikers, but this power is just worse than every other striker option ever. If you made it a weapon attack, that would help some. If you use Inherent Bonuses (which I like in general, but which will interact strangely with Planescape’s default “enhancements decrease as you get away from their source”), it’s better.

If you’re interested in alternatives, the 2e bariaur flavor suggests to me something like the Scout Ranger’s Aspect of the Charging Ram. I’d make it an encounter utility free action power, used when you hit with a charge attack, and it’d deal +1/2/3d6 extra damage and knock the target prone or push it 2 squares. On the plus side, it’s something that the ‘ramming’ bariaur will likely use for the life of the character. On the minus side, it really only adds to a charging character, rather than adding charging to a character. Also worth keeping in mind: in a relatively open game, charging is already powerful, and can become unbalanced.

Thanks again for sharing this! I’m happy to see someone picking up Planescape+4e!

Once again, chad, you come to the table with some good stuff. I hadn’t considered the effect of the racial power at higher levels. That has caused me to rethink the racial power I came up with for the next race I’m doing.

One question I have had (that maybe you can answer) is how much development drift was there from the original Planescape books to the later ones?

Nice balance between classic flavor and 4e race presentation. I think you nailed the essence of the race’s cultural traits through mechanics without focusing on it, keeping player choice high. Well done.

Amazing. I’m not the only person who’s trying to adapt Planescape to 4th Edition. I’m going to check out your other posts, and I think I’m already convinced to make some changes to my version of the bariaur. If you’re interested, we could exchange ideas: I’ve been having some trouble deciding how to handle factions. Let me know what you think.

I’d love to exchange ideas. I’ve got a few things in mind for how to handle factions. In short, my current thinking is a combo of themes, paragon paths, and feats.