Part of the Winter Is Coming RPG Blog Festival.

“Hello, mortals. The name’s Sanctimarin, Master of the Frozen Breeze. I’m gonna give you some of the dark about my home, the plane of ice. You’ve probably read all kinds of fancy books by your so-called scholars, but I’m here to give you the real chant. You might call me an ice mephit, and I might freeze the blood in your veins. Got that, bub? Let’s just move on, shall we?”

The Paraelemental plane of Ice sits between the planes of Water and Air and borders the planes of Steam, Lightning, Salt, and Vacuum. Adventuring here is a deadly affair, as the coldest parts of the plane are capable of freezing flesh, blood, and even thoughts.

The safest parts of the plane of ice aren’t friendly and welcoming, as each hour of travel requires an Endurance check with a DC of 20 or take 10 points of cold damage.

Resistances and vulnerabilities are unchanged by the plane.

So the picture below represents the plane of ice. Click for an enlarged version. It’s my recreation of a diagram originally found in The Inner Planes (TSR, 1998). Note that the areas of the plane are not discrete sections like this. Think of it more as a general guideline of what to expect. As you get closer to the plane of steam, the environment begins to look and feel like the fog of unyielding frost. 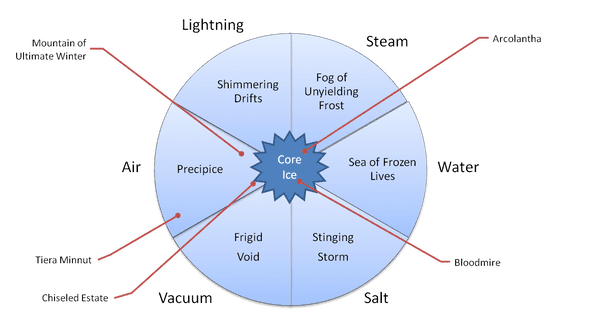 For the DM looking for some interesting locales, consider the following list.

The Mountain of Ultimate Winter

This is the coldest place in the plane of ice, supposedly the coldest place in all of the multiverse. Even thoughts and concepts can freeze here, leaving behind crystals worth up to 7 500 gold pieces (treat them like a gemstone or art object and have fun with what’s frozen).

Arguably the safest place on the plane, Tiera Minnut is a floating city encased in a protective arcane shell. It even negates the planar effects listed above. This would be an interesting locale for a couple of adventures.

The icy palace of Cryonax, prince of evil cold elementals, could serve as the site of a final battle.

The Bloodmire is the site of an ancient battle between the frost giants and the frost trolls, both of which are found natively on the plane of ice. This could be the supposed resting site of some power magical artifact.

The Arcolantha is a deep crevice in the ice, perfectly spherical with an orb of pure white light at its center. Frozen just beneath the surface is a menagerie of animals, supposedly every animal in the multiverse. Is it some wizard’s strange collection? A site created by some forgotten race? Who knows?

The plane of ice - while being inhospitable to most - still has quite a bit of life (some indigenous, some just visitors). Any of the following may be encountered (straight from the compendium).

This is just a cursory glance through the compendium. This doesn’t even leverage one of the best things about 4E, re-skinning by changing keywords.

Great, but How Do the Heroes Get There?

The burning question is how to get to the plane of ice. Here’s a couple of suggestions.

Hopefully, this has sparked some ideas and started that hamster in your brain running on his wheel.

I don’t know how you feel about ‘purity’ versus ‘cool’, but I personally felt that having Ice and Steam share a border was a weird call based more on matrix-filling than in-game logic. If you’re making your own (awesome) charts for your 4e conversion, maybe you feel like tweaking this one out. Im my last campaign where it came up, I made the para- and quasi-plane borders highly mutable (especially the air borders, less so earth), including sometimes removing convergences, and it worked well. Eberron uses a similar concept of planar boundaries as ‘weather’. Of course, I’m sure I’ve just killed someone’s cool steam/ice concept, so maybe sticking to the base is better.

I like the inclusion of denizens and means of entry. I might suggest a standard-ish template for your planar descriptions, and including some ‘doors’, or perhaps just a section labelled “Doors”.

I love the classic reference of the ‘picture of tundra that pulls the players in’. With the Heroes of the Feywild book about to come out, you might consider a hook mentioning the fey Winter Court. Finally, never underestimate the fun of a frost giant/titan/troll shaman or wizard banishing the party to another plane. It’s a lot more fun than “Second Failed Save: Unconscious”, and I promise you that your banisher will move waaaay up on the party’s hit list. :-)

Yeah, I’m not sure where I stand on the purity vs. cool scale. I suppose I move back and forth along it, straying more towards purity if necessary.

I’m definitely working through the format. In my mind, I see each blogpost I do as a rolling series of thoughts that I will come back to and revise and re-release as a new blogpost with a standard format. We’ll see how it goes. Hopefully everyone can hang in there with me as I do this.

This was the first post where I thought to myself, “I need to flesh out some details here to help other DMs who might want to use it.” That’s why I added the monster entry and possible entry points. I’m glad you liked it. I’ll definitely add it to my template for planar ecology entries.