I had the wonderful opportunity to be on Tome Show Episode 191 last night with Jeff Greiner (@Squach on Twitter), Tracy Hurley (@SarahDarkmagic on Twitter), and Michael (@ClayCrucible on Twitter). We had an awesome time talking about the newest D&D 4e book, Player’s Option: Heroes of the Elemental Chaos.

My purpose today is not to rehash what was said there. You can listen at the link above. My purpose today is to try and create my own implementation of the Lord of Chaos epic destiny (found on page 140). Michael and I both felt that this epic destiny left a lot to be desired, so I thought I’d take a crack at improving it (with all due respect to the designers that crafted it).

Without further ado, I present my altered version of the Lord of Chaos. (Note that I’m only including the mechanics, as I don’t want to reprint the entire entry from the book.)

At level 25, gain the Minor Whim of Creation power (which was the level 26 utility power with a few changes). 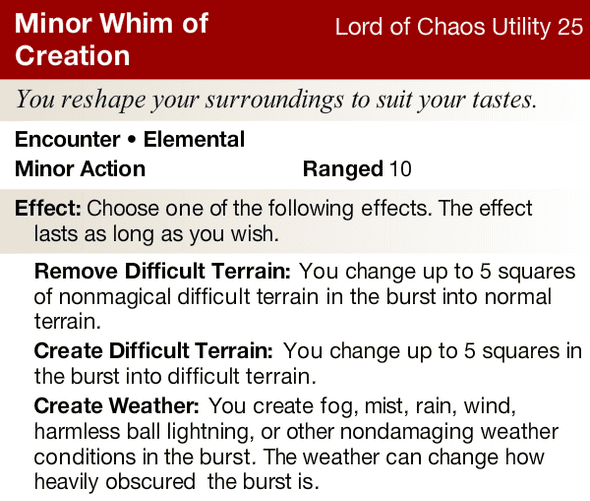 At level 26, gain the Whim of Creation power (brand new). 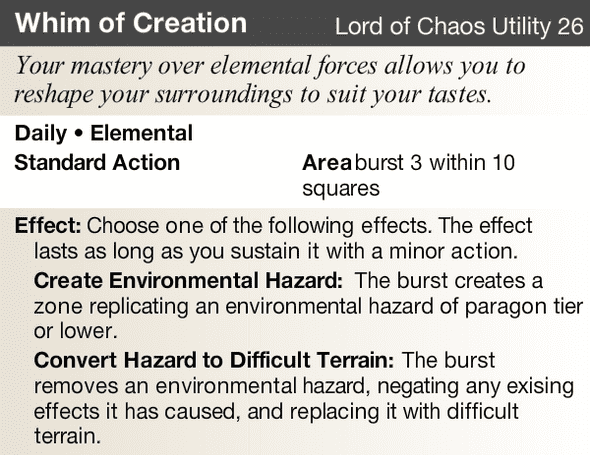 At level 28, the Lord of Chaos also gains the ability to use his primary stat instead of Intelligence for the Influence Unstable Plane skill (page 10 of the Manual of the Planes).

At level 30, the Whim of Creation power is replaced with the Chaotic Whim power. 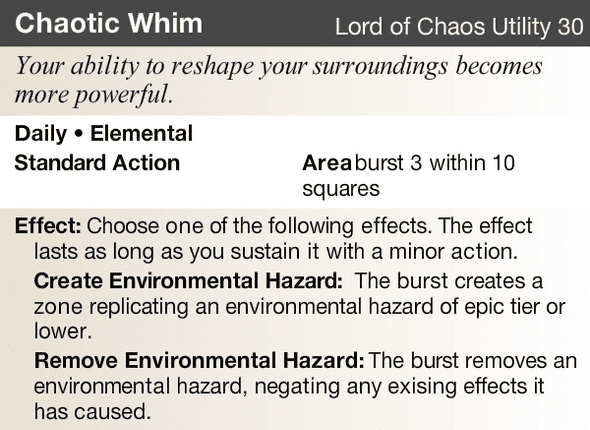 I also think it would be a good idea for the DM to suggest/impose that the Master of Chaos create a demiplane or stronghold within the Elemental Chaos as part of his destiny.

These are my rough thoughts on what would be good. I haven’t playtested them, but I’d love to hear about it you use it at your table. Also feel free to tweet at me if you have comments or suggestions. (I’ll even take criticism, as long as it’s constructive.)

Hmm. Is it common for Epic Destinies to grant a power at 25th and 28th level? I was under the impression that they were pretty rules-based in the way they were designed (21 features / 24 features / 26 utility / 30 features). On the other hand, this destiny is CHAOTIC! So it breaks all the rules.

I definitely think that your version of the Whim of Creation is better than the original, and I don’t think the Minor Whim is really necessary.

I don’t have Manual of the Planes, and Influence Unstable Plane doesn’t seem to be in the online Compendium, so I’ll take your word for it that it’s awesome. But again, I don’t think the Destiny needs a level 28 power.

I’d go a bit of a different direction overall. I’d keep your Whim of Creation as the Level 26 power, and I agree that the Level 24 feature is fine as-is. The Level 30 feature should be something different from either the Master of Chaos feature from the book or the Chaotic Creation / Chaotic Whim you’ve designed. I’d like it to be something that embraces awesome randomness. For instance:

“Whenever you bloody an enemy or score a critical hit against an enemy, roll a d6.

“You increase your Charisma by 2, and your origin becomes Immortal.

Choose 3 Wizard cantrips. Once per round, you may cast one of these cantrips as a free action.”

I see this guy as throwing around Mage Hands and Prestisigitation and Ghost Sound to confuse and confound people. Maybe it’s not powerful enough, but it sounds like fun to me!

Thanks for putting this together!

Thanks for the feedback, OnlineDM.

I considered the fact that I was breaking the existing rules, but I was okay with that, honestly, even without considering the chaotic feel of it. I can send you a picture of the skill from MotP if you’d like.

I like the L30 power you’ve got here. With your permission, I’ll replace Chaotic Creation with it. I considered the L21 features, but I think the wizard cantrips at that level might be a bit weak for the tier without adding a lot of fun IMO. I like the idea of throwing in some options there. I’ll need to revisit it.

Glad you liked it!

Sure, go nuts with the Level 30 stuff!

I’m not sure what to stick in Level 21. Like I said, the magic item doesn’t thrill me, but the cantrips don’t really DO much. Sigh - the life of an amateur designer is so hard! :-)